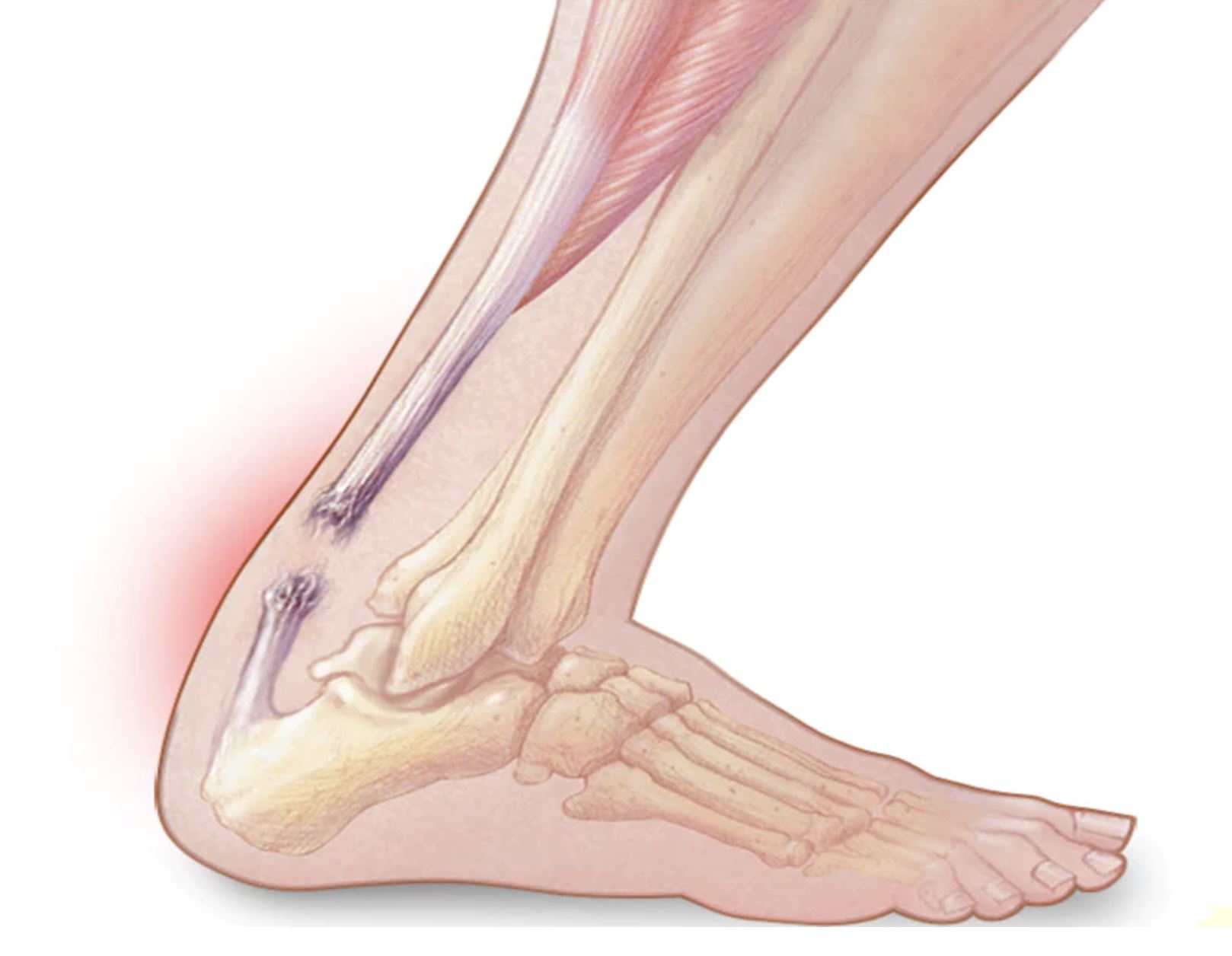 What is an achilles rupture? 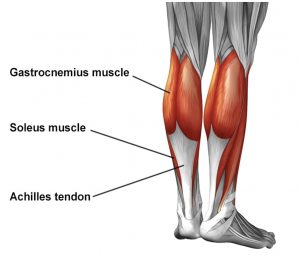 The achilles tendon is extremely important in our movement and gait.

It is the strongest tendon in the body, however it is prone to injury.

It connects some of the muscles in the lower leg to the heel, including the gastrocnemius and soleus muscles.

The achilles is a structure that stores energy much like a rubber band in order to propel you forward with each step.

An achilles rupture can be classed as either partial or complete, involving the tearing and separation of the fibres of the achilles tendon.

Partial and complete ruptures of the achilles tendon can feel quite different.

In a partial rupture of the achilles, patients usually experience severe pain and swelling at the back of the leg.

In fact, even though a complete rupture is a more serious injury, you will actually feel more pain if you have had a partial rupture!

If you’ve had chronic achilles pain, this will essentially be a similar type of pain but will be exacerbated. Pain is also often felt at the back of the heel.

In both a partial and complete tear, bruising may also be present at the back of the leg.

Put simply, you will definitely know if you have completely ruptured your achilles.

You may recall feeling a ‘pop’ from your achilles tendon at some point, usually during activity.

If this is the case, it is important to receive medical attention as soon as possible as early intervention is best in a complete rupture.

Often, people say that they can hear a pop or even a gunshot when an achilles tendon completely ruptures due to the large amount of energy being stored in the tendon being expelled.

Some people even say that they feel as though the back of their leg and achilles have been kicked, particularly in kicking sports such as soccer and football.

If you have sustained a full rupture, pain may not always be the strongest sensation. Weakness and difficulty walking are generally the strongest symptoms.

If there is a complete rupture, the calf muscles often retract up towards the knee and they are usually very tight and painful to touch, particularly up towards the back of the knee.

What causes an achilles tendon to rupture? 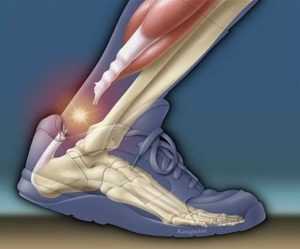 An achilles rupture is caused by an acute and sudden movement in which the foot is in a plantar flexed position and the achilles is contracted, such as when trying to take off for your next step or when jumping.

Chronic inflammation of the tendon (tendonitis) and previous injuries are often risk factors as they can weaken or stiffen the tendon over time, making it more susceptible to injury.

Who is affected by this kind of injury?

Achilles injuries are quite common in sports people, particularly runners and those participating in sports with jumping and change of direction movements.

It can still occur in people who are not athletes, however research suggests that approximately 80% of achilles ruptures occur during physical activity.

Achilles ruptures are most common in men aged between the ages of 30-40 and the demographic is largely ‘weekend warriors’, such as those participating in park run and sub elite sports.

Studies have shown that the ratio between males and females is approximately 10:1.

How is an achilles tendon rupture diagnosed? 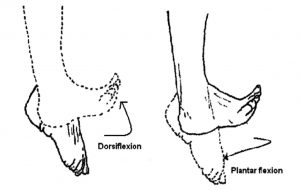 Most patients will know if they have ruptured their achilles tendon immediately after it has happened.

When we suspect a rupture, we press on (palpate) the calf muscles and the achilles tendon.

You can usually easily feel the tight band of the achilles tendon on palpation, however if it is ruptured, you will not feel this and it will feel soft.

If the achilles tendon is still palpable, it may be a partial rupture rather than a full rupture. In this case, we will send you off for scans to confirm (ultrasound/MRI) as it is sometimes difficult to differentiate between a partial rupture and tendonitis.

Other clinical tests can include checking the range of motion of the ankle joint. In the case of a complete rupture, there is weakness in the movement of plantarflexion and there is increased movement through dorsiflexion.

We also perform a test called the Thomson’s test, which involves squeezing the calf muscles. Usually this forces the ankle into plantar flexion, however when the achilles tendon is ruptured the connection to the heel has been lost, meaning that plantarflexion cannot occur in this test.

Patients will also struggle to walk on their tip toes as this position relies on strength of the achilles and its attachment to the heel.

How is a rupture treated?

Treatment for partial and complete achilles ruptures can differ depending on the extend of a partial rupture.

Icing the area will help to reduce inflammation and provide an analgesic effect which helps to decrease pain.

These will help to reduce inflammation and assist with pain relief.

This is often necessary in the early stages of a partial rupture to help to immobilse the ankle joint and achilles. Usually, you’ll spend 6-8 weeks in a moon boot.

This may be necessary depending on the extent of the partial rupture, particularly if it involves a high percentage of fibres.

The ankle is cast into approximately 20 degrees of plantar flexion to allow the tendon fibres to reunite and then it is recasted every few weeks to gradually reduce this angle as the tendon heals. Casting can be completed for 8-12 weeks.

This will include exercises to improve your balance, proprioception and strength through not only the achilles tendon, but the rest of the lower leg, foot and ankle as well to reduce the risk of compensation injuries elsewhere.

This will assist in increasing blood flow, reducing trigger points through the calf muscles and assisting healing within the achilles tendon itself.

This will help to reduce tension and trigger points within the calves, which will then reduce pressure on the achilles tendon. 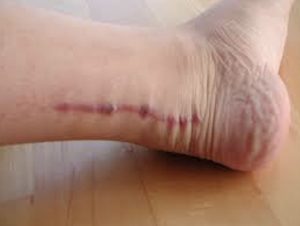 Sometimes surgery is not required for a partial tear, however this will depend on how much of the achilles is ruptured. This involves repairing the portion of the tendon that is ruptured.

Surgery is required in a full rupture in order to restore function of the achilles tendon as well as the lower leg and ankle joint.

These will be very similar to strengthening programs for a partial rupture, however as this is often performed post surgically in complete ruptures cases it is generally more extensive. On average, patients will usually return to sport and activity 4-6 months following surgery.

The chance of re-rupture by opting for non surgical interventions is 10-40% higher compared to a 2% risk with surgery. It can also result in a longer recovery time, however this will depend on factors such as age and the extent of the injury.

How to prevent an achilles rupture

So how can you prevent an achilles rupture? Here are some simple tips!

Proper warm up and cool down

Seeing as the main demographic for achilles ruptures are ‘weekend warriors’, it is important that you are also making sure that your general fitness is sufficient. This may include gym sessions, pilates or yoga in addition to your sport specific training and games.

See a podiatrist at the first sign of pain in the achilles!

Early intervention is key, and prevention is better than cure! As with all other pain associated with activity, it is best to have it assessed as soon as possible to prevent it from getting worse. This will greatly reduce your risk of further injury!

How Much Does It Cost?