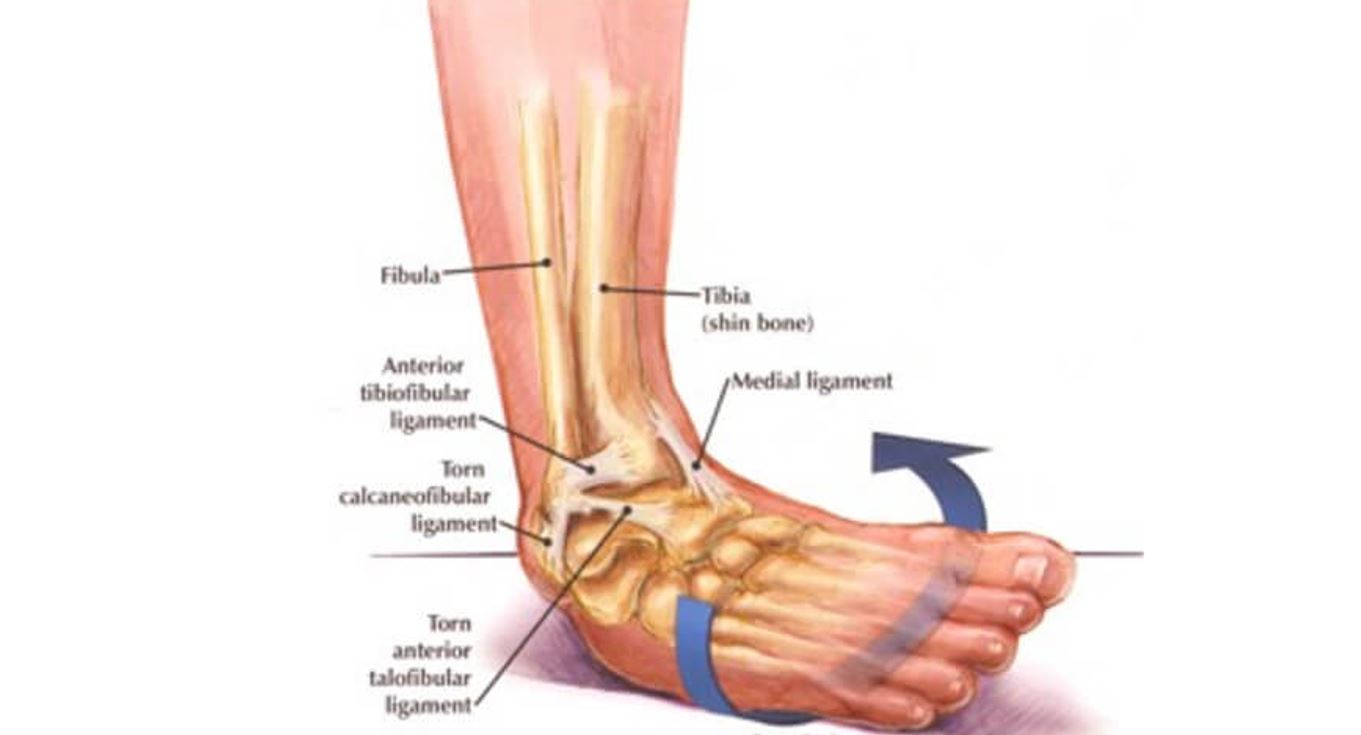 Ankle sprains, also known as rolled or twisted ankles, are one of the most common sports injuries in the world. Yet, despite this, they are generally treated poorly, and often result in ongoing issues with the affected ankle.

If you played almost any sport growing up, chances are you have rolled your ankle before.  However, sport is not the only way that we can sprain our ankles.  It can happen simply walking on uneven surfaces or stepping off a gutter. An ankle sprain can result in a lot of pain and ongoing ankle issues. Today, we’re here to talk you through all things ankle sprains!

What is an ankle sprain?

Ankle sprains involve your foot being forced outside of its normal range of motion, which places a large amount of stress on the ligaments that try to limit this motion.

There are multiple types of ankle sprains, with the lateral ankle sprain being the most common.  This causes pain primarily on the outside of the ankle and happens as a result of rolling the ankle in the motion pictured below.

The damage caused to the ligaments of the ankle can often result in bruising, swelling, and a significant amount of pain at the outside of the ankle.  The most common ligament to be damage in the process is called the anterior talofibular ligament, commonly referred to as ATFL.

The ATFL connects the fibula bone of the leg to a bone in the foot called the talus.  When this ligament is put at full stretch by rolling the ankle inwards, it can either partially tear or completely rupture. This results in what is known as a lateral ankle sprain. Another ligament commonly affected is the calcaneo-fibular (CFL) ligament, which attaches the fibular to the heel bone.

In severe cases of lateral ankle sprains, the ligament may take a piece of bone with it when it ruptures – this is a common method for people ending up with a broken ankle. For this reason, you may be sent for an x-ray in the case of a severe ankle sprain to rule out a fracture.

Eversion ankle sprains, which involve rolling the foot the opposite way and pain on the inside of the ankle, are much less common than lateral ankle sprains.  The deltoid ligament, which connects the ankle to a few different areas of the foot, is the ligament usually affected by this type of ankle sprain. 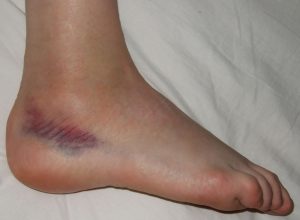 Ankle sprains can sometimes cause a cracking or popping sensation when they happen and you will feel your foot roll excessively inwards.  A significant amount of pain is normally felt following an ankle sprain, which may linger for many days, even weeks, depending on the severity.

The ankle will typically present with swelling and bruising the following day – an example of this bruising can be seen in the image to the right.

An ankle sprain generally results in a limp for a period of days to weeks. In severe cases, crutches may be required to offload the limb.

Pain may also be present for multiple weeks following a lateral ankle sprain.

How is an ankle sprain diagnosed?

Ankle sprains are generally easy to diagnose, however, it is important to determine the extent of the damage. It’s also important to identify the specific ligaments damaged.

The first step will be your podiatrist asking you a range of questions. Some of the questions include; how the injury occurred, which way your foot rolled, if you heard a crack or pop sound; and what it feels like now.

This will be followed by a visual assessment where we check for swelling and bruising. At this point, if the sprain is quite severe, you may be sent for scans to rule out a fracture or determine the extent of the ligament damage.

Other tests that may be performed include palpation of individual ligaments, the anterior drawer test and the talar tilt test. These tests help to determine which ligaments have been damaged, and the severity of the damage.

How long does it take for an ankle sprain to heal?

The recovery time for ankle sprains varies greatly based on the severity of the sprain.  However, in many instances, athletes are rushed back into sport before their ankle has healed properly.

Athletes have found a variety of ways to get through a game without allowing these ligaments to heal, such as taping, injections, and ankle braces. However, ankle sprains have the highest rate of recurrence of any sports injury, with up to 70% of people who suffer this injury re-injuring the same ankle. This is generally as a result of athletes returning to sport too soon, or patients not treating the ankle correctly.

Lateral ankle sprains can range from taking a week to several months to heal.  Either way, it is important to commence proper rehabilitation of the ankle to reduce the risk of re-injury and chronic ankle instability.

How are ankle sprains treated?

The first step to managing any ankle sprain is RICE! If you are not familiar with the acronym, we’re not talking about the food! A sprained ankle should be rested, iced, compressed, and elevated.  If pain is severe enough, an x-ray should be conducted to rule out a fracture. And the use of crutches should be considered if offloading the ankle is necessary.

Passive range of motion exercises include using your hands to move the ankle in a variety of directions which will be explained by your podiatrist.  Active range of motion involves creating the same movements but doing it without the assistance of your hands, instead, utilising your lower leg muscles.

Once the ankle is capable of active range of motion with no pain, it is time to introduce some resistance.  This can be achieved at first by using very light resistance bands, and gradually increasing the thickness of the bands. The aim is to be able to perform bodyweight exercises, such as calf raises, with no pain.

The next step is to introduce proprioception training.  Proprioception training involves training your body to become aware of where the limits are in terms of your ankles range of motion.  This may sound strange, but following an ankle sprain, your body tends to become confused about how far your ankle wants to move.  Thus, it is important to retrain where the limits of your motion are.  This may involve stability work such as single leg exercises, balance ball work, and active range of motion exercises.

The final step to rehabilitating a sprained ankle is to build up to functional movement training.  This is where we want to eventually replicate what you are doing in any sport you want to get back to.  This may include activities such as hopping, side to side jumping, or agility work. The aim is to ensure you don’t go back to sport and re-injure the tissue.

If a sprained ankle was treated incorrectly the first time around, or has not responded well to these initial treatments, then Shockwave Therapy is a good option to kickstart the healing process.  Shockwave therapy involves weekly sessions where acoustic pulses are sent through the tissue to initiate an inflammatory response.

If none of these options have worked for you, or your ankle sprain is extremely severe, surgery may be the correct option to get your ankle back to normal.

Working on increasing the stability of your ankles by completing exercises such as squats on unstable surfaces or isolating stabilisers of the ankle is a great way to prevent the incidence of an ankle sprain!  Lebron James can be seen doing this in the image to the right.

Bracing and taping are great ways to hold an ankle where it should be when returning to sport.  However, it is not ideal to use these methods in the long term, as it prevents your muscles and ligaments from getting back to normal. And it also increases your body’s reliance on the tape.

Using bracing techniques should be slowly tapered out as you increase the strength of your stabilising muscles. See an example of an ankle brace to the right.

If you are someone who has had years of recurrent ankle sprains, even when simply taking the dog for a walk, custom orthotics with lateral foot support may be the answer for you.

These can be placed in your shoes to prevent the likelihood of the ankle rolling outwards.

If you have had long lasting ankle pain due to an ankle sprain, come book an appointment today with one of our superstar podiatrists here at Watsonia Podiatry. We can help treat your ankle injuries, or pain and/or discomfort you may be experience in your feet and lower limbs. Call us on 03 9432 2689 or book online here.

How Much Does It Cost?